Treatment of diseases by ELECTRICITY with Voldemar Ragel’s method! To do this it is necessary:
1. To restore the electric charge in the cell of the human body .
2. The body fluids to give the properties of electrically charged electrolyte , the electrolyte like a car battery .
3. To restore functions of the body — the nervous, cardiovascular, hematopoietic, endocrine, lymphatic and immune systems.
4. To allow own stem cells to divide, move, replace diseased cells in the organs and systems without a transplantation.
i e. to create the conditions in which the patient becomes his own donor, treats himself by his own stem cells .

The discovery of stem cells is on a par with such great achievements of mankind, as the discovery of the double helix of the DNA chain. The term «stem cell» was first used by the Russian hematologist A.A.Maksimov in 1908. In the 60 years of the twentieth century, Soviet scientists A.Fridenstein and I.Chertkov had laid the foundations of the science of stem cells in the bone marrow.
Only 20 years after bone marrow transplantation became a medical practice. Currently, studies how embryonic stem cells and adult cells are actively conducted in developed countries. Particularities of stem cell is not their specialization. They are the precursors of cells of all organs and tissues during fertilization, which make up the cells of other types: skeletal, muscular, nervous, cardiovascular, hematopoietic, endocrine, lymphatic, immune and other systems. In fact stem cells — a «repair crew,» which flows into the problem areas, replace the damaged cells of the patients. Stem cells are found in all organs and tissues of the body, but the concentration is found in the bone marrow, embryo liver. Due to its ability to be converted into any tissue, the stem cells can be used to treat a huge number of diseases.
How is the treatment of diseases with stem cells today?
Modern medicine for the treatment of diseases with stem cells uses — transplantation. Cells are taken from a donor or artificially grown.
Approximately it look as follows: 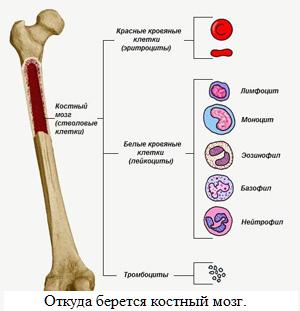 With the use of electric drill a hole is drilled in the femoral or iliac bone, where there is the greatest mass of bone marrow and a needle with a wide lumen and a half to two hours pumped from 500 to 1000 milliliters of a mixture of bone marrow. The resulting bone marrow is treated removing blood and bone fragments.
After several days of operation the donor is placed in a special hospital under supervision of a physician, the amount taken from the donor bone marrow is recovered within three to four weeks.
Finding an absolutely healthy person who could be a bone marrow donor — the problem is complicated, linked with painful procedure, performed under general anesthesia.
Extracted, processed in the laboratories, the stem cells go back into the patient’s body, facing a number of complications. Most of them are not fully universal; they can grow only in cells of the tissue from which they were taken. The reasons for this are still unclear. In addition, the procedure is expensive, complicated and not reliable, because of incompatible tissue rejection often with fatal outcome.
By administering the stem cells, there  is a struggle «transplant against host,» as the old bone marrow, although sick, resists the new bone marrow, the resistance of old bone marrow suppressed — steroid hormones, anticancer drugs, immunosuppressive agents, the chances of survival were about 42% .
With such an unreliable and inefficient stem cell treatment, the cost of treatment is high, for example — bone marrow transplant clinics in foreign countries varies from 70 to 450 thousand U.S. dollars, in Turkey — 70 million, in South Korea — 80 -100 thousand In Israel — up to 200 thousand in the United States — 450 thousand in Germany — 250 million euros, in Russia — 100 thousand euros.
Not only one has to pay for the surgery, but the procedure for the preparation of the bone marrow for the transplant. In Russia, the bone marrow from the donor costs 50 thousand rubles., Preparation of stem cells for transplant — also 50 thousand now.
Only one course of chemotherapy in Israel costs more than 10 thousand, and the selection and preparation of the donor — not less than 50 thousand dollars.
Russia does not have its stem cell banks, therefore, ready product for operations is bought from abroad, 70 percent of patients who did not receive medical care because of the inability to find a compatible donor.

Instead of the method above, the author has found a direct way: the patient becomes his own donor, heals himself by his own stem cells.
The main directions of the following:

Timely renewal of the cellular composition is essential to the health and longevity of each person. The younger the organism, the more powerful features of its restoration, because he has greater supply of their own stem cells. Own stem cells are not infected with viruses, are resistant to infection by nature have a margin of safety for all severe cases of the body, and persist throughout life. They are of all ages, just in time the quality and quantity to restore the body is markedly reduced. From this sicknesses, ageing, death. To activate the mechanism of the multiplication of its own stem cells in the human body without transplantation and their consecutive transferring to the sick organs and systems, the following should take place:
1.Renewal of the electric charge in the cell of the human body.
2.Ensure that liquid medium of the human body is electrically charged as an electrolyte car battery.
3.Recover the function of the nervous, cardiovascular, hematopoietic, endocrine, lymphatic and immune systems.
4. Only in this case, it is possible to promote one’s own stem cells to diseased organs, systems, to restore function.
Practice shows that the shortage of electrical potential in the cell is the primary cause of the occurrence of fatigue, uncomfortable condition of the body and the appearance of diseases.
The story of my method to dates from the 60-ies of XX century. Big sport was left because of injuries. I had too much problems with my health. No relief occurred whichever physicians treated me. Undertook to heal itself. By that time, there were various publications using electric current instead of needles on the Chinese method — electropuncture. I made up some procedure of relevant  treatment, but it did not help.
Abandoned the classical techniques, left on «armed» only with electric current. On itself by  probes and errors was developed a “new method” of treatment. Self-medication allowed me to create an original methodology and technology, the device with which I healed myself, my  friends, who are not able to be successfully treated and cured by conventional medicine.
The device consisted of a flat battery flashlight design 60 years of the twentieth century, an ammeter and two electrodes. One electrode was placed in the palm of your hand, the second in the form of needles work on the active points of the body. Once when repairing the medical apparatus, took the passive electrode in the mouth. And I saw the changes in the readings of the instrument, the ammeter needle deviated sharply to the right, during normal operation this was not observed. Since then the place has become a passive electrode instead of the palm of the mucous membrane of the mouth, and the active electrode handles painful zones without biologically active points. As it turned out, through the oral mucosa I went to the stem cells of the body, it was 50 years ago.
The effectiveness of the location of the passive electrode on the oral mucosa confirmed in 2011 by Israeli scientists, published in the journal Stem Cells, August 26, 2011, the stem cells of the mouth:
«Eternal Youth» of stem cells of oral mucosa: a new «revolution» or a real chance? «
The method works on a constant electric current — voltage from 2.5 to 36., Current up to 600 mA. Author of the method took part in the International Forum «Archimedes-2002» (Moscow),  attended by 15 countries: the U.S., Japan, Korea, Russia, etc.
By the Decision of the International Jury, the author of the method was awarded a Diploma and a Gold Medal for the development «method of electrotherapy by V.D.Ragel.»

I am introducing the apparatus created by the author to launch stem cells:

References: 1.NNN NANO NEWS NET — Website about nanotechnology # 1 in Russia. «Eternal Youth» of stem cells of oral mucosa: a new «revolution» or a real chance?
Publication of work August 26, 2011 in the journal Stem Cells, a new direction in the study of stem cells and the development of potential therapies.
2. Book-monograph by Valdemar Ragel «Long live human stem cells», the author’s project — a supplement to the «fundamentals of rhythm-resonance», Bulletin number 1 (2012).
3. Book of Voldemar Ragel «from the incredible to the evidence,» my own method of treatment with stem cells — CNIT «ASTERION» 2013.
4. The article «Treatment of a person’s own stem cells by the method by V.D.Ragel ‘Magazine: ISSN Society-Environment-Development of 2-2013.
5. The article «Treatment of diseases with stem cells by the method of electrotherapy by V.D.Ragel ‘Magazine: Fundamental Basics Rytmo-Resonance St. Petersburg 2011-2013.
6. The article «The experience of the treatment of depression and schizophrenia method by V.D.Ragel person’s own stem cells,» Journal: Fundamental Basics Rytmo-Resonance St. Petersburg 2011-2013.
7. The article «Method by Voldemar Ragel — treatment of diseases own stem cells», Journal: Peter’s Academy of Arts and Sciences Bulletin Peter’s Academy 1 (30) St. Petersburg in 2013.
8. Author website: vd-ragel.ru

Ragel Valdemar Dominikovich inventor, author of the method: Grand Doctor of Philosophy in the field of alternative medicine and healing. Full professor of. Academician of Petrovsky Academy of Sciences and Arts. Honorary Master of Sports in weightlifting.